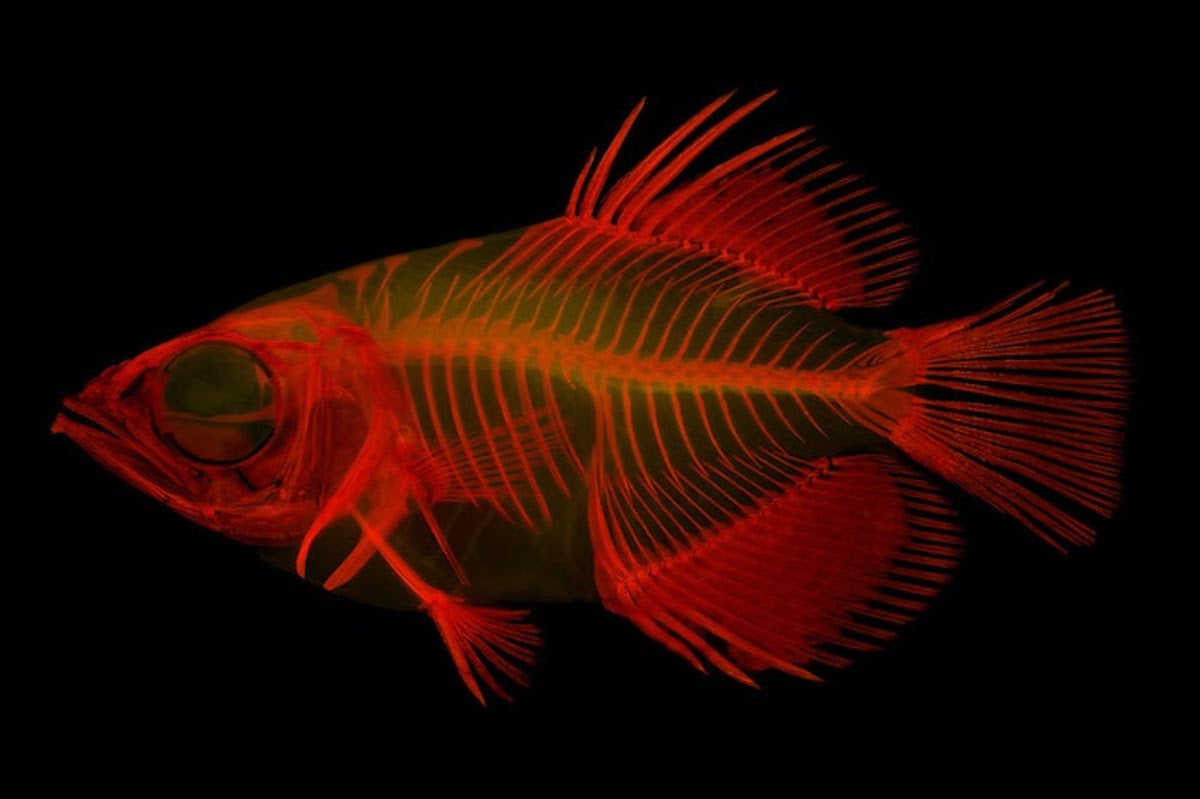 Despite archerfishes’ renown among ichthyologists and aquarium enthusiasts, until now not much scholarly work has been performed on them. Matthew Girard

On the hunt in swamps, river mouths, and brackish coastal water, archerfish pick off insects with pinpoint precision. They don’t need arrows—instead, they shoot jets of water over a meter at their prey. The streams of water knock bugs out of the sky and are incredibly accurate. Despite their popularity—the fish are common in zoos and kept as pets—relatively little has been studied about the evolution of these aquatic sharpshooters.

In a new study published in Integrative Organismal Biology on Monday, ichthyologists and other team members at the University of Kansas investigated the archerfish, from the origin of the various species to the divergence of the family of fish. For years, the ichthyology community had debated what counts as part of the archerfish family. By taking a closer look at the tiny bones involved in the unique shooting behavior, the study authors were able to identify an unexpected evolutionary tree, branching from Asia to Australia.

“We looked at how these fishes are related and asked, ‘How did this amazing mechanism of allowing them to actually be able to spit come to evolve?”’ said lead author Matthew Girard in a press release. “We had some ideas of what other kinds of fishes they were related to, but for the first time we’ve generated a hypothesis of how all these species of archerfish are related to each other.”

The researchers created something similar to a family tree, using software to track molecular genetic data and fish tissue structure through time. By doing so, researchers were able to trace the evolution of the fish’s ability to jettison water. The results showed that all species of archerfish have grooves on the roof of their mouths as well as enlarged dental plates. These tube-like features, similar to a water gun’s barrel, enable the fish to squirt water at flying targets.

[RELATED: Fish can tell the difference between human faces]

In addition, the researchers found proof that the archerfish are closely related to beachsalmon, both genetically and in their shape. Structural similarities in the beachsalmon’s mouths possibly suggest existing physical features were co-opted by the archerfish to shoot water.

Beachsalmon don’t hunt with hyper-accurate water jets, though. “Just because other fish can move water, it’s not anything like [the archerfish],” co-author Leo Smith said in a statement. “I equate it to, ‘I could put a trumpet in my mouth, and I suppose I could make noise come out of it, but not like Miles Davis.’ It’s like a fundamentally different thing, too, a really remarkable specialization for catching insects.”

With this study, researchers may soon be able to find out even more about these uniquely gifted fish. Between the genetic data and the tissue structure, mapping the spread of these fish and the branches of the family tree contains large amounts of scientific data. Clarification of the origins of the animals may answer such questions as how many species of these maritime snipers exist.

[Related: This anglerfish has mastered a trick to light up the depths of the Pacific Ocean]

The post An archerfish family tree is the best shot yet at the evolution of sniper fish appeared first on Popular Science.

Source: popsci.com
An archerfish family tree is the best shot yet at the evolution of sniper fish