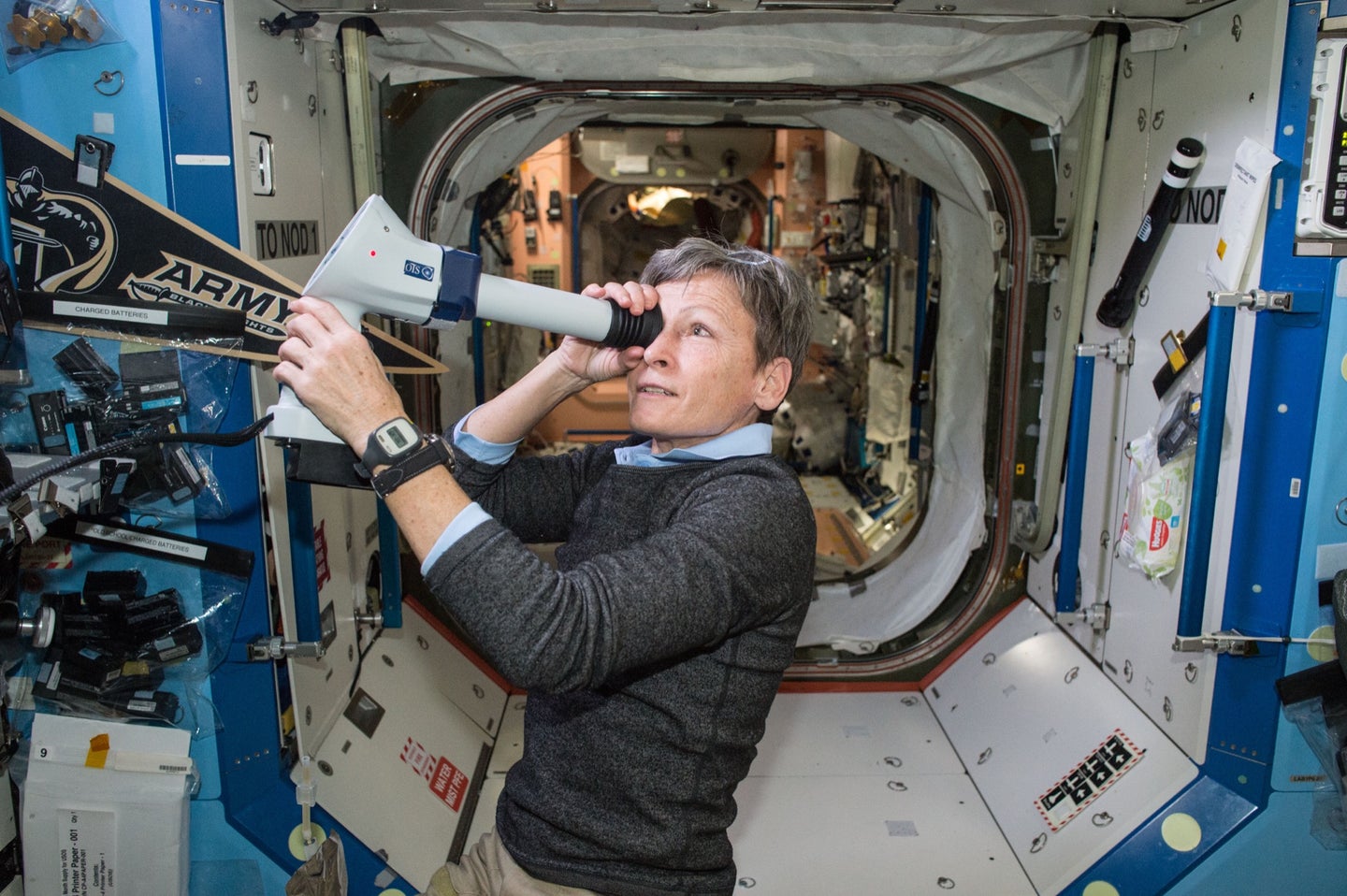 Seeing the stars in all their glory from the inside of a spacecraft might be a once-in-a-lifetime opportunity—but if you spend too much time in outer space, Earth might be a sight for sore eyes.

This week in the Proceedings of the National Academy of Sciences, a new study suggests that long-duration spaceflight can impair an astronaut’s vision. The sight condition, called spaceflight-associated neuro-ocular syndrome or SANS, was found to be associated with the volume of the fluid-filled spaces that surround blood vessels in the brain. The condition can cause astronauts to experience blurry vision and nausea.

Giuseppe Barisano, lead author and neuroscience researcher at the University of Southern California, partnered with an international team of scientists to investigate how an astronaut’s brain changes in space.

“This study is probably the largest neuroimaging study [done of] astronauts, and the first one [to] include MRI data from astronauts and cosmonauts from three different space agencies,” Barisano says.

During the Space Shuttle Program, astronauts would go to space for weeks at a time and return to Earth with no vision issues. But when the crew transitioned to spending longer periods of time in space aboard the International Space Station, they began reporting changes in their vision.

When doctors studied their eyes, they saw minute changes and sometimes swelling to the optic nerve, a bundle of nerve fibers in the back of the eye that carries visual information to the brain. This swelling can cause headaches, nausea, and blurry vision.

[Related: Spending time in space could shrink your heart]

After a trip from space, symptoms have also been known to resemble a condition called idiopathic intracranial hypertension, a disorder that arises from high pressure around the brain, which can cause vision changes and headaches.

All these side-effects spell bad news for space travelers.

To better understand how space is altering human sight, the team analyzed the MRI scans of 24 NASA astronauts, 13 Roscosmos cosmonauts, and an undisclosed number of ESA crew members. They took scans within two weeks before and after six-month long spaceflights on the ISS. Then, Barisano and his colleagues compared the amount of fluid build-up after spaceflight in an astronaut and cosmonaut’s perivascular spaces, which are the compartments around a person’s blood vessels in their brain.

On Earth, if these structures are bigger than usual, it can be an indication of deteriorating brain health. Past studies have linked increased fluid in perivascular spaces with a number of diseases and health conditions, including Alzheimer’s, hypertension, vascular dementia, and mild traumatic brain injury that reflects early and permanent brain changes. The researchers determined that living in space for longer periods of time is closely associated with an increase in the overall volume of the fluid in the perivascular spaces.

More research is needed to find out what causes this increase in fluid, but it’s most likely yet another adverse effect of living in a space environment. For instance, in zero gravity, astronauts’ faces often become bloated in space due to the extreme fluid shift their bodies undergo. Some previous ISS crew members have even coined the term, “puffy head, bird legs” to describe the experience. This overall shifting of bodily fluids can lead to problems like blocked sinuses or even space anemia, but SANS specifically causes cerebrospinal fluid to shift headward, forcing structural changes to the brain and eye. Previous studies have also linked the increase in pressure inside the head from microgravity to structural changes in the shape of the eye.

[Related: Space might be the perfect place to grow human organs]

While their findings show that humans are able to adapt to long-term exposure to microgravity, the results of crew members from different agencies varied. For example, the increase of fluid was more prominent in NASA astronauts than their Russian counterparts. Because they share the same environment and are exposed to the same types of radiation and microgravity, there is no easy explanation for why they showed this difference, Barisano says.

“One potential explanation could be related to microgravity countermeasures, which are slightly different in NASA astronauts compared to Roscosmos cosmonauts,” he says.

These countermeasures include high-resistive exercise protocols, which can affect fluid redistribution in the brain. Russian cosmonauts use a technique called lower body negative pressure (LBNP). The cosmonauts put their bodies in a chamber that acts like a suction cup—decreasing the pressure inside causes fluids from the upper body to shift back down into the lower body. While effective, it doesn’t mean that such a method is the answer to all their space woes.

Barisano hopes the findings from the study will be used to predict which astronauts would fall victim to the condition, and prepare for the possibility in advance.

Although it’s still not widely understood, SANS can affect up to 70 percent of all astronauts. To try to stop or slow down the condition, NASA has been making efforts to provide preventative healthcare measures to astronauts before long missions..

“They’re actually sending astronauts up with an extra pair of glasses, because they know that their vision is going to be changing in space,” says Donna Roberts, a professor in the college of medicine at the Medical University of South Carolina.

[Related: What an extraterrestrial archaeological dig could tell us about space culture]

These “space anticipation glasses” are fully adjustable specs that can be refocused much like binoculars to fit an astronaut’s vision needs.

But ocular problems—even those with tentative solutions—will only hinder the first batch of interplanetary explorers. “That’s not a good solution if we’re planning on establishing a permanent colony on the moon, and then going on to Mars,” Roberts says.

Although their study didn’t account for certain lifestyle factors like gender or diet, it’s unknown whether the effects of SANS eventually goes away back on Earth, mostly because it’s difficult to track. It isn’t NASA policy to subject astronauts to tests months after their return, Roberts says, but if humans want to understand how the brain is affected by space, more advanced imaging techniques on astronauts need to be done before humanity heads deeper into the cosmos.

Roberts says that human health in space needs to be better understood if “we [are] going to keep humans healthy and safe, and happy and functioning.”

The post Long spaceflights could be bad for our eyes appeared first on Popular Science.

Source: popsci.com
Long spaceflights could be bad for our eyes

To fight cyber attacks, tech companies are banding together

Here’s how to fix the latest Android Messages bug