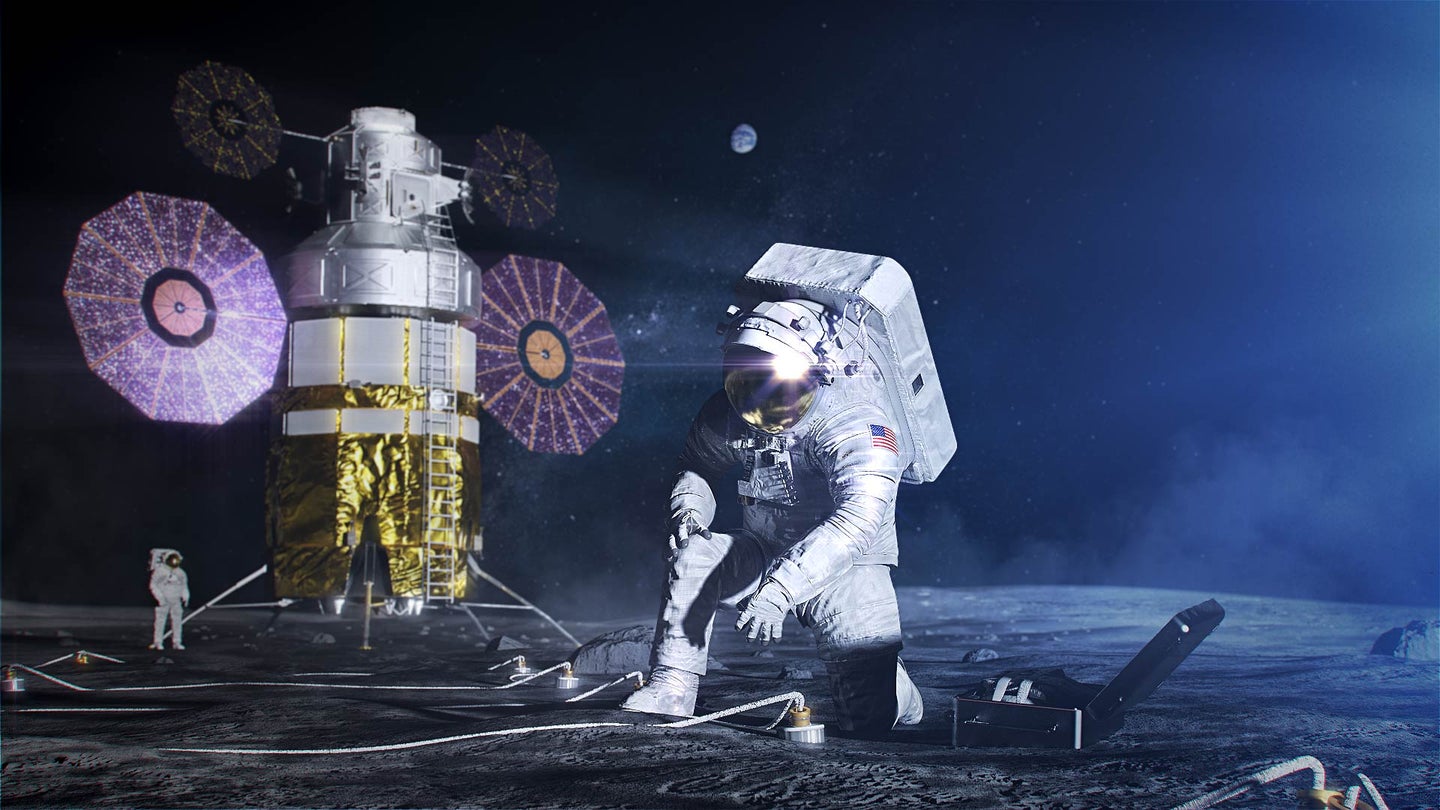 An illustration of the xEMU suit, designed for Artemis-era missions, that has faced development setbacks during the COVID-19 pandemic. NASA

As NASA plans to return to the moon, future astronauts could soon be sporting some brand new outerwear. After 40 years of withstanding the wear-and-tear of living in space, modern spacesuits are finally getting a makeover.

On Wednesday, the agency announced that it’s partnering with two private space companies, Axiom Space and Collins Aerospace, to build the next generation of spacesuits. Astronauts will wear those suits to conduct spacewalks aboard the International Space Station, explore the lunar surface during Artemis missions, and prepare for human-led missions to Mars.

The companies were chosen as part of the Exploration Extravehicular Activity Services contract, an agreement that allows selected companies to compete for tasks through 2034. These tasks, which include demonstrations outside the space station and for the Artemis III mission, have a combined maximum worth of $3.5 billion.

During the June 1 NASA press conference, agency officials said that while the companies will technically own the spacesuits they create, developing public-private partnerships like this one allows NASA to save on costs while accomplishing more from a design and development standpoint than the agency could possibly do alone.

“We’re not only meeting NASA’s objectives, but also helping to support and encourage an emerging space economy,” said Lindsay Aitchison, a program executive for NASA’s Extravehicular Activity and Human Surface Mobility Program. “It’s exciting, it leads to innovation, and makes sure that we have sustained competition along the way.”

The spacesuits will also be “a key focal point when we take those first steps back on the lunar South Pole,” Aitchison added, and the contract is a major milestone toward that goal. As for potential suit designs, both companies are still in the early design stages, so it’s hard to say what the new outfits will look like. But they could potentially be much different than previous iterations, as NASA’s current spacesuits aren’t capable of withstanding the harsh conditions future deep-space explorers will experience.

They’ll also replace the aged spacesuits ISS astronauts use for extravehicular activity, or what are known as spacewalks. The ones used now are so old, they were originally designed nearly half-a-century ago for the Space Shuttle program. “The existing spacesuit has been the workhorse for the agency for 40 years, and it’s helped maintain and utilize the International Space Station as well as construct it,” said Dina Contella, the operations integration manager for the International Space Station program at the NASA Johnson Space Center.

In 169 of the 250 spacewalks that have been completed aboard the station, she said, astronauts wore the current iteration of the space suit. But because they’re restrictive, rarely upgraded, and have had a long history of issues—the latest being a shelved spacewalk due to a space helmet leaking water—they just won’t cut it for long-term space exploration. And it’s about time to try out new spacesuit technologies anyway, Contella said.

[Related: Why NASA is running out of spacesuits]

While plans are still in place to retire the ISS in 2030, testing how the suits fare on the station will help guide astronaut’s gear needs for future missions. “[The] ISS is a testbed, and especially a testbed for exploration,“ Contella said. “We’re looking forward to learning what we can on ISS and then handing what we’ve learned over to Artemis.”

And as we race toward learning more about deep-space exploration, it’s worth noting that this isn’t the first time the agency has put some serious thought into revamping its lunar mission suit designs. In 2019, NASA released the Exploration Extravehicular Mobility Units, or xEMU, a suit tailor-made for Artemis-era missions, and said that they would build two of them by 2024.

But due to the pandemic, funding shortfalls and an array of technical challenges, it’s now highly unlikely that the xEMU design will be flight-ready even by 2025.

According to a 2021 report from NASA’s inspector general office, by the time two xEMUs are completed, the agency will have already spent over $1 billion sponsoring the creation of the next-gen spacesuits Axiom and Collins Aerospace are currently working on. That’s a huge jump, considering that since 2007, NASA has poured about $420 million into spacesuit development. More than half of that was spent in the last five years.

To bring their vision of the next NASA spacesuit to life, Dan Burbank, a senior technical fellow at Collins Aerospace, said that one of the company’s goals is to have users, which could someday include both astronauts and future space tourists, “deeply embedded” in the design aspect of the project.

“Although we will often call the spacesuit the world’s smallest spacecraft, it’s human shaped, human-sized, it shouldn’t feel like a spacecraft,” he said during the conference. “We want to be able to create an immersive environment that for the crew member gives them the most amount of mobility, that complements a crew member’s capability rather than constrains it. So we’re very excited to do this.”

The post NASA chose these designers to make over its ancient spacesuits appeared first on Popular Science.

Source: popsci.com
NASA chose these designers to make over its ancient spacesuits

Google’s expanded Markdown feature could change how you work