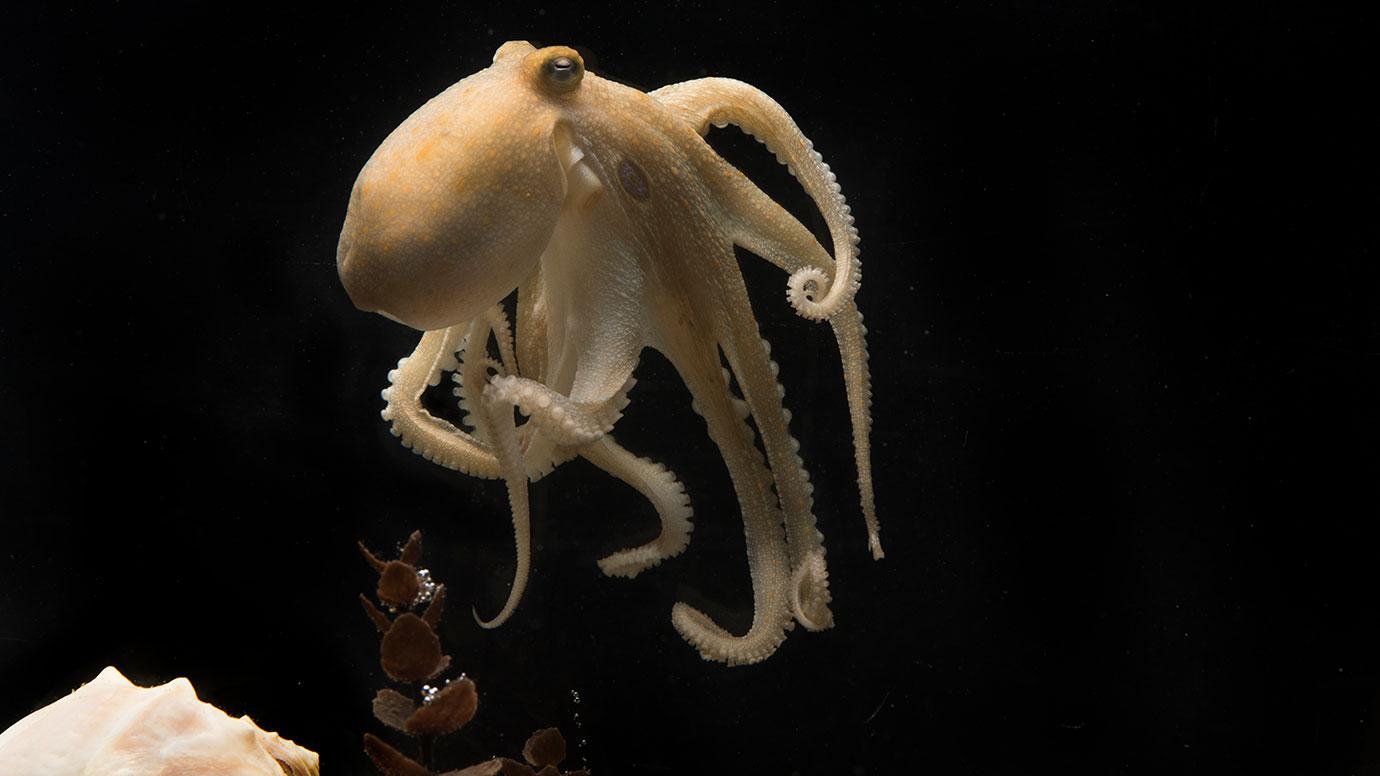 Three pathways could be the link to the mysterious cause of death in female California two-spot octopuses and a few other species. Tom Kleindinst, Marine Biological Laboratory

For some octopuses, motherhood almost certainly means a tragic death.

After laying its eggs, a female octopus undergoes a dramatic mental shift—from living a normal den life and gently caring for its embryos to no longer eating, dropping muscle tone, and changing color. Worse, it might engage in acts of self harm, like scarring itself against the gravelly sea floor or even eating its own body parts.

“What’s striking is that they go through this progression of changes where they seem to go crazy right before they die,” University of Chicago neurobiology professor Clifton Ragsdale said in a recent press release.

New research out in the journal Cell this week shows the pathways in the octopus brain that could lead to this strange behavior. Previously, cephalopod experts have hypothesized that its purpose could be to distract predators away from eggs, donate the nutrients from the mother’s body to the young, or protect a herd from older octopuses that won’t think twice about cannibalizing each other’s young.

Studies from way back in 1977 linked the strange behavior to the optic gland—endocrine organs in squid and octopuses that contribute to sexual development and aging. When the optic gland was removed from Caribbean two-spot octopus mothers, the animals tended to abandon their eggs, move on with their lives, and keep swimming for several more months. Forty years later, University of Chicago researchers sequenced RNA from the optic gland from a similar species called California two-spot octopuses. Their results, which were published in 2018, determined that as octopus moms started to mentally decline, genes that metabolize cholesterol and produce steroids start to become more active.

In their new research, Ragsdale and his coauthor Z. Yan Wang broke down the chemicals that the optic gland was producing around the time of the octopus mother’s behavioral break. The found three specific pathways light up: The first produces pregnancy steroids pregnenolone and progesterone; the second produces components for bile acids; and the third produces increased levels of cholesterol-precursor 7-dehydrocholesterol (7-DHC).

“We know cholesterol is important from a dietary perspective, and within different signaling systems in the body too,” Wang said in the release. “It’s involved in everything from the flexibility of cell membranes to production of stress hormones, but it was a big surprise to see it play a part in this [octopus] life cycle process as well.”

Elevated 7-DHC levels have an immediate tie to a human disorder called Smith-Lemli-Opitz syndrome. It can affect mental development and behavior in children, and is often linked with self-injury and aggression.

Strangely enough, not all octopus mothers resort to self-sabotage after giving birth. The lesser Pacific striped octopus, in particular, gives birth and carries on normally, and is the subject of Wang and Ragsdale’s next research project. Whether or not its optic glands act similarly in the three newly pinpointed pathways could be a gigantic clue to why some octopus mothers move on after birth—and others fall apart.

The post Octopus mothers often ‘self destruct.’ We might be closer to knowing why. appeared first on Popular Science.

Source: popsci.com
Octopus mothers often ‘self destruct.’ We might be closer to knowing why.

What TikTok’s deal with Oracle could mean for user security