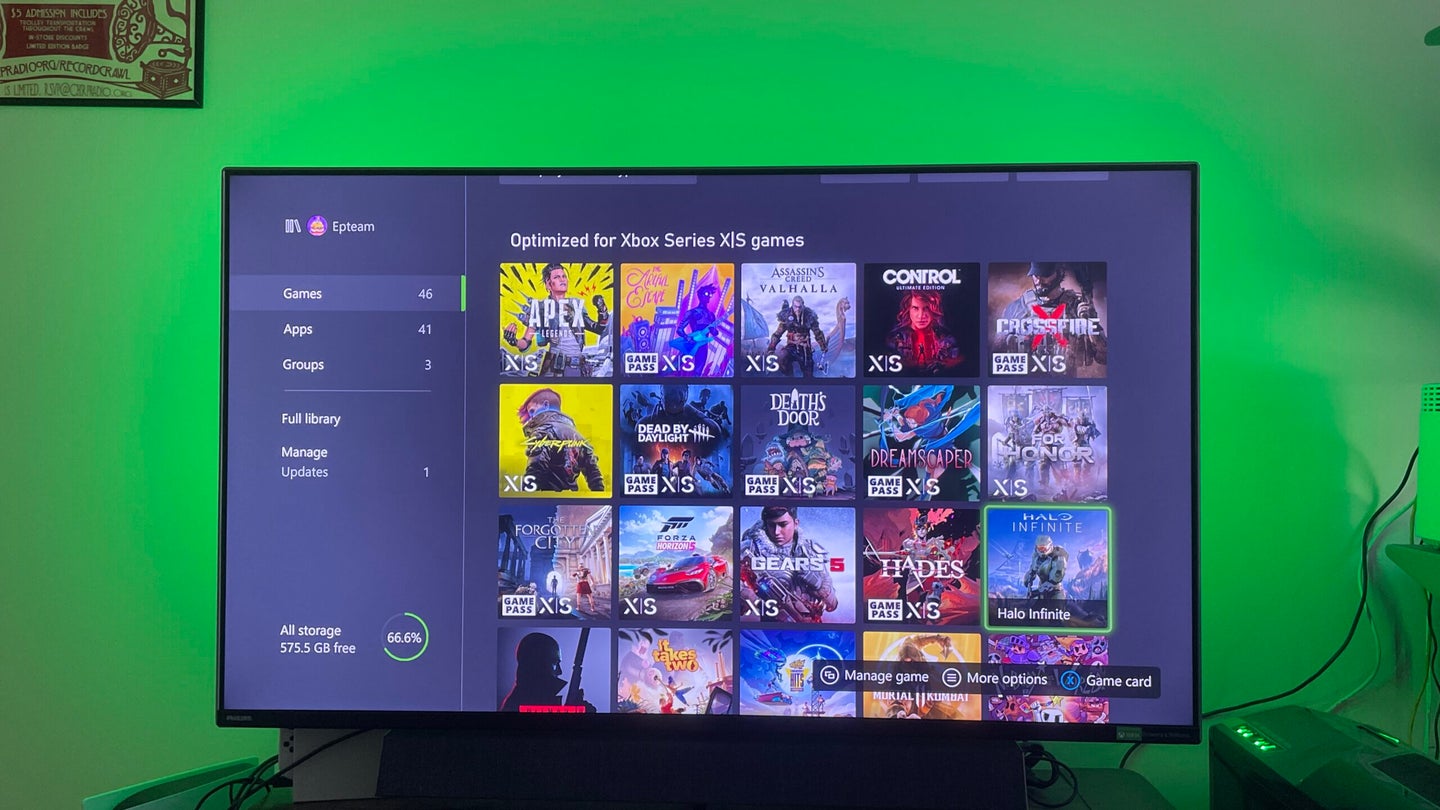 In a world where people are cutting out cable and playing more video games than ever, there’s a real, if very niche, use case to be made for gigantic, TV-sized computer monitors that usurp the vaunted position of home theater centerpiece from traditional TVs. Philips’ Momentum 559M1RYV 55-inch 4K HDR monitor, the first flagship monitor to earn Microsoft’s “Designed by Xbox” seal of approval (awarded in 2021), feels as if it’s designed to fit specifically in that niche.

The Philips Momentum 559M1RYV offers HDMI 2.1 to play games in 4K at 120Hz, exactly what the Xbox Series X and PS5 call for. There’s a built-in soundbar designed by audiophile speaker designer Bowers & Wilkins, ensuring a better audio experience than your average TV. And, of course, for those who want to connect it to a PC, it features the full range of monitor configuration options, DisplayPort 2.0 ports, and all the other accoutrement typically associated with a screen that sits on a desk rather than a TV stand. Switching from a TV to a gaming monitor as your primary entertainment screen comes with some compromise, but the Momentum 559M1RYV makes that transition as easy (and fun) as possible.

Tell me about the Philips Momentum 559M1RYV monitor

Beyond its astronomical size—nearly twice the size of a 32-inch monitor—the Philips Momentum 559M1RYV is a very strong, feature-rich 4K gaming display. The core things you need to know are plain: It’s a 16:9, 4K, LED-backlit panel capable of running at up to 144Hz through HDMI or DisplayPort, and 4K at 120Hz via USB-C. That combination—4K and 144Hz—is a very telling combination. Among PC monitors, 4K displays are still somewhat uncommon, especially with a frame rate above 60Hz, because that spec requires HDMI 2.1 and DisplayPort 1.4 or higher (plus appropriate cables). As with modern TVs, it’s part of a rapid shift to adopt 4K/120Hz as a new standard to accommodate the current maximum capabilities for the Xbox Series X and PlayStation 5.

Though it has many of the hallmarks of monitors, the 559M1RYV features core specs that line up more closely with a mid-range to high-end TV. The clearest example comes from its brightness rating. The 559M1RYV is VESA-certified DisplayHDR 1000, outputting at up to 1,200 NITs (1,000 NITs is a magic number for high-dynamic range, allowing you to get full-range lighting conditions). It’s much more common to hit that number in TVs than gaming monitors, and console makers emphasize HDR as a key element of visual fidelity. Also, the bigger the screen, the brighter it has to be.

It’s a vertically aligned (typically referred to as VA) panel, which means the display emphasizes visual fidelity over response time. Specifically, the 559M1RYV has strong contrast and dynamic brightness that emphasizes small details in games. I can’t say that I noticed any issues with visual latency playing on Xbox Series X, PS 5, or Nintendo Switch, but 4ms is slow by gaming monitor standards, so competitive players might find that its sharp picture falls prey to light artifacting and other visual hiccups in high-speed, low-fi esports scenarios. The 559M1RYV’s rated for 95% DCI-P3 wide color gamut, outputting deep, well-saturated color.

Perhaps the most TV-like aspect of the experience, however, is the fact that it comes with a remote to change inputs and settings. It isn’t as intense as the average TV remote—there’s no numpad, just a handful of buttons and a directional pad for navigating menus. Personally, I find using the remote far easier than the onboard buttons you need to use for most monitors, making it one of the most comfortable configuration experiences I’ve ever had.

OK, but does that mean it isn’t good for playing PC games?

At the same time, using the 559M1RYV still feels like using a PC monitor over a TV in many respects. You feel it most when configuring the monitor. Even when using the remote, the expanded range of settings for adjusting color, HDR, and other options feels streamlined with a PC mindset. I find monitor settings easier to follow than TV settings, so I consider this a plus.

Its suite of inputs includes 3 HDMI 2.1 ports, 2 DisplayPort 1.4 ports, and a USB-C port to support the maximum range of input devices. (MacBooks want to be plugged in monitors, too.) It also features 4 USB 3.2 ports and a USB Type-B port, the latter of which you probably won’t use.

And then there are the places where the two functions blend. I see it most in the 559M1RYV’s Ambiglow lighting—built-in LEDs that project RGB lighting from the top and sides of the TV, either based on what’s on your screen or in a colorful, mood-setting pattern. I loved that the backlighting is easily configured through the monitor’s settings menu. Is it useful in any way? Absolutely not. But it will absolutely change the whole mood of a darkened room in a very fun way.

While the immense size of the 559M1RYV is its most striking quality, its built-in soundbar may actually be its most fascinating feature. Designed with audiophile speaker company Bowers & Wilkins (makers of fantastic stereo and all-in-one systems), it features a wide five-speaker soundbar grafted onto the bottom: two tweeters, two mid-range speakers, and a subwoofer.

Simply put, this is the best sound I’ve ever heard from a monitor with built-in speakers. That’s one of the lowest bars in consumer technology, but it’s an accomplishment nonetheless. In most cases, monitor speakers aren’t worth using. Still, it goes a long way to making the monitor really feel like an “all-in-one package.”

The soundbar delivers a strong, even-keeled sound that’s both louder and more precise than your average TV or monitor speakers. You can really hear the whizz and ping of bullets flying, or the crunch of a wooden door as its splinters and shatters. Compared to discrete soundbars, however, its precision and punch lack meaningful power. That doesn’t mean it can’t get loud, but its bass response lacks the force of even a relatively inexpensive standalone soundbar. Curiously, the sound system also lacks virtual Dolby Atmos support for simulated surround sound, which seems like a no-brainer for an Xbox-focused device. Bottom line: This will feel like a huge upgrade to non-audiophiles, but hardcore A/V nerds will likely still want to upgrade their sound systems.

What’s it like using a gaming monitor instead of a TV?

Generally speaking, switching from my mid-to-budget-range 4K TV to the 559M1RYV felt similar to jumping to one of the best TVs for gaming. The over 1 billion colors are richer and deeply saturated, bringing out details in the gradient you might not see in lesser devices. At $1,599.99 for the 55-inch model, it makes sense that the picture would compare to a high-end LED TV.

The contrast is also strong in smaller, specific details, so you get those perfect, subtle, HDR-enhanced moments like shadows cast by a campfire at night. Don’t expect to get the amazing blacks of either an OLED or even a QLED panel, though. In fact, I found some issues with LED blooming, which can make the bottom corners of the screen appear lighter than they should. It was really only noticeable in the opening moments of watching a show or starting a game, however, and quickly dissipated.

For a monitor, I found it offered strong viewing angles. You can see it from pretty far to the side, further than I would normally expect of a monitor. When using the stand, it features -5/10 degree vertical tilt, so there is some room for adjustment to find the right angle. Still, I might hesitate to recommend this if you like to have people over for big movie nights.

The TV-sized form factor can shift your expectations around ease of use, which mostly works against the 559M1RYV. For example, the HDMI “handshake” when you switch from one input to another almost always takes 1-2 seconds, which sounds short, but feels very long when turning on a game console or switching from one to another. When connected to a PC, you rarely notice a monitor “boot” because your PC needs time to start up. In a TV setting, it’s far more noticeable and can be a wee bit annoying.

In that same vein, I noticed that the auto start-up feature on the PS5 and Series X, which will activate or deactivate your TV when you turn the consoles on and off, don’t work with the 559M1RYV. Like the handshake issue, it’s a minor annoyance, but a weird little compromise that you may not realize you’re making when you change over from a TV to a monitor for console gaming.

So, who should buy the Philips Momentum 559M1RYV 55-inch 4K HDR gaming monitor?

The Philips Momentum 559M1RYV holds a fascinating place among gaming screens. It is technically large enough to replace a TV but comes with all the quirks and pleasures of using a high-end monitor. Given its sharp, colorful picture, it’s easy to recommend for anyone who wants to plug their PC into a TV-sized screen for gaming or as the hub of their home theater. It’s also great if you want an all-in-one home theater package with a soundbar, ambient lighting, and support for all your new consoles.

Given the Philips Momentum 559M1RYV’s extraordinary $1,599.99 price, it’s hard to say it’s a strong pick over a smaller PC monitor or a top-of-the-line TV. Many of the best 55-inch TVs, such as the LG C1, do offer much higher contrast and a more delicate range of colors. The 559M1RYV offers elite depth and sharp lines, but not as wide a range of color or pure blacks. On the other hand, I can’t really recommend someone use a 55-inch monitor as part of a traditional desk setup. You need to sit a few feet away from a screen this size, so it is not a good replacement for one or even two 24-32 monitors.

I think there’s room for a large-format monitor similar to this to appeal to a wider gaming audience. Realistically, it has to be a little more streamlined and priced to compete with mid-range TVs, rather than the best of the best. For now, the Philips Momentum 559M1RYV Designed for Xbox monitor is the ultimate solution for a very specific set of tech-savvy, hardcore player who wants their PC and consoles in one place.

Google’s expanded Markdown feature could change how you work