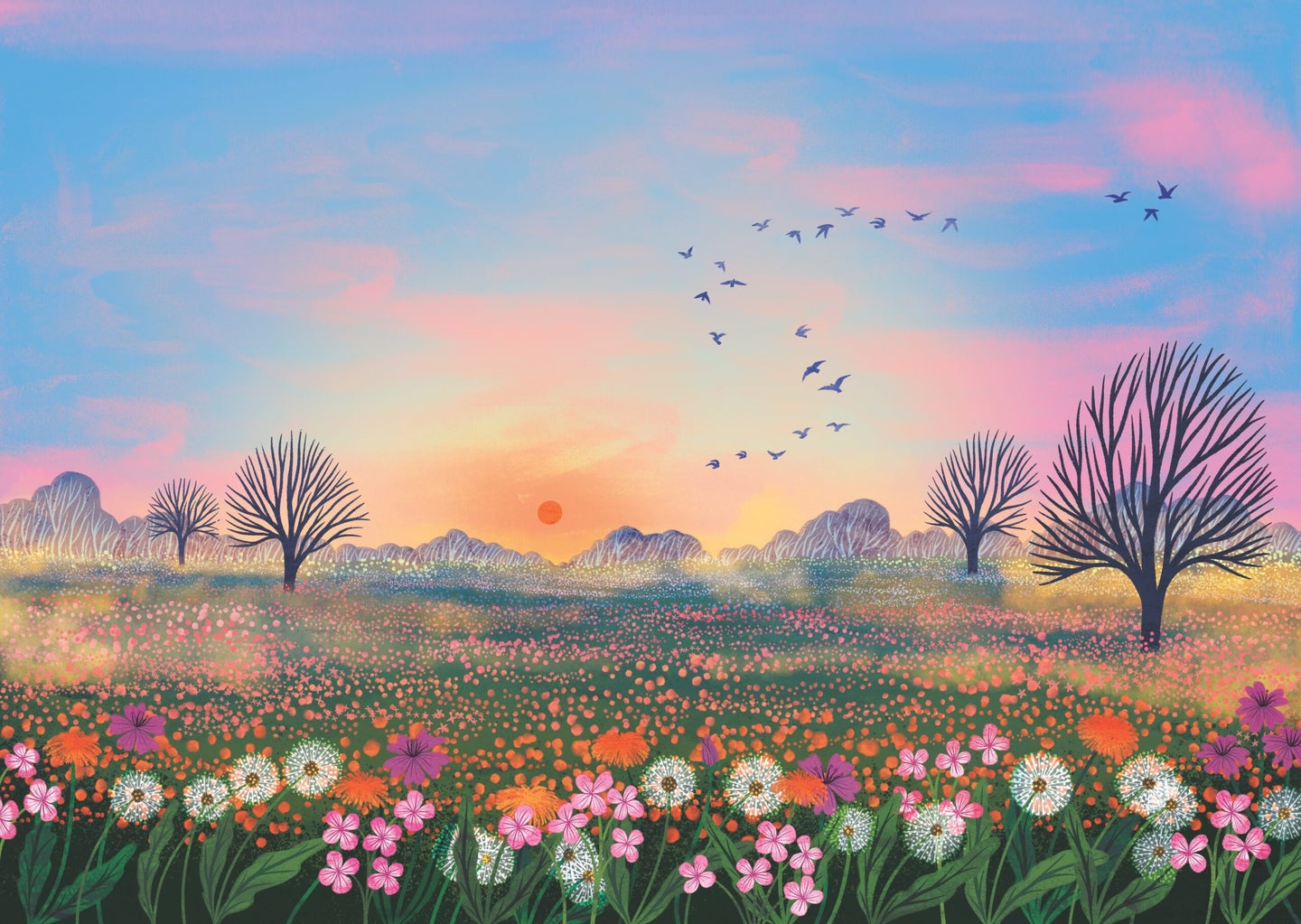 Germany’s Green Belt is blossoming after the fall of the Berlin Wall. Amy Grimes/The Quarto Group

The following is an excerpt from Wild Places by Sarah Baxter.

From deathly divide to life line. Few would have foreseen that the dark, decades long fracturing of a continent would give the earth such respite, foster such green shoots, see natural connections spring from such grisly division. And yet, a ribbon of land once consigned to concrete, guns, barbed wire and border guards has been revitalised; it is now home to orchids and otters, wood grouse and wild cats, marsh fritillary butterflies, black storks, rare mosses. It is rivers rewilded, forests recovered, meadows more biodiverse, once severed countries united by conservation. The fearsome frontier that few dared to cross–and where some died trying–is now a place of hope and renewal.

In 1945, at the close of the Second World War, a so-called iron curtain was drawn across the middle of Europe, which would divide the continent for nearly 40 years. Stretching from the Barents Sea, at the Russian-Norwegian border, right down to the shores of the Adriatic and the Black Sea, it began as a political and ideological fissure, separating the Soviet socialist-influenced East and the free-market-thinking West. But, over time, it became a physical boundary too: a long and near-impervious barricade of walls and wire fences, watchtowers, ditches, bunkers and booby traps.

Nowhere was the ‘curtain’ so heavily militarised as along die Grenze, the ‘inner German border’ that separated the German Democratic Republic (GDR, East Germany) and the Federal Republic of Germany (FRG, West Germany). This line ran for almost 1,400km (870 miles) from the Baltic Sea to what was then Czechoslovakia, ploughing through villages, sundering communities, tearing friends and families apart. On the GDR side especially, the fortifications were heavy and complex along the wall’s entire length: a restricted zone, protective strip and outer fences were built behind the border, which was patrolled by 50,000 armed troops. Almost 700 towers were erected; 1.3 million mines were laid. It created a virtual no-man’s-land—a fatal void that claimed the lives of many of those desperate enough to try to cross.

This was a deadly space for many, yes. But not so for wildlife. While the Cold War rumbled on, political tensions ran high and the world was in a state of flux, the environment along the line remained insulated from radical change. Development and most human disturbances in this narrow frontier ceased. Border areas were largely off-limits so no agriculture was practised, no shopping malls were built; people were kept away, either by fear, force or choice. Thus nature was permitted a break, able to revive, diversify and stretch along the divide, creating an almost continuous corridor of semi-wilderness from the Baltic to Bavaria. The area’s 5,200 or so species of flora and fauna–over 600 of which are considered endangered—were left to their own devices. The fortified fences provided little impediment either, with animals such as foxes and badgers simply tunnelling their way through.

The benefits that this brutal barrier was bringing to nature did not go unnoticed. The German Federation for the Environment and Nature Conservation (BUND) was created in 1975 and began recording the growing diversity of species and habitats within the ‘death strip’. Specifically, it found that 90 percent of several endangered bird species, such as whinchat and woodlark, preferred to breed inside the border zone and avoided farmland. In 1989, when die Grenze (and the Berlin Wall) finally fell, the German Green Belt project was born. Its task would be a formidable one: to turn this interminably long and ugly defensive network into the most unconventional of nature reserves.

Today the German Green Belt–or Grünes Band Deutschland–is a beaded necklace of rich, varied, vital conservation areas strung between land that has been intensively farmed. Much of the military paraphernalia has been dismantled, though some observation towers, memorials and fence sections still stand, providing poignant and important reminders of the past. Former customs officers, foresters and locals who bore witness to the divide in action now lead guided tours. In places, old barracks have been transformed into hotels. But now nature is in charge.

And what a variety of nature. Because the Green Belt stretches so far, it encompasses a wide ecological gamut, from sea cliffs and dunes to lakes, riverbanks, ravines, moors and mountains, wildflower meadows, beech forests, quaking bogs, ponds, lagoons and heather-cloaked heath. Within these various environs, many species thrive. The coast is a haven for grey seals, goosander and migratory common cranes. Along the Elbe River there are breeding storks and soaring white-tailed eagles while, come winter, huge flocks of whooper swans fill the skies. Lynx have been successfully reintroduced to the caves and crevices of the Harz Mountains–a heavily defended landscape, once completely off-limits–and birch and pine trees are starting to sprout in land unintentionally tilled during the search for mines. Wild cats hide out in the woodlands of Eichsfeld, while the Franconian Forest harbours marten, deer and wild boar. Vogtland is a flourish of flower-flecked grasslands, birdlife and butterflies. On the border with Czechia, there are streams in which pearl mussels thrive.

The German Green Belt is still a work in progress. Some sections were destroyed following reunification, creating gaps along the line. But the hope is that these will be closed, so that the course of the iron curtain can be preserved both for history and for nature.

Excerpted from Wild Places by Sarah Baxter, published by White Lion Publishing. Reprinted with permission. All other rights reserved.

The post The Iron Curtain’s border zone has grown into a wild, ecological haven appeared first on Popular Science.