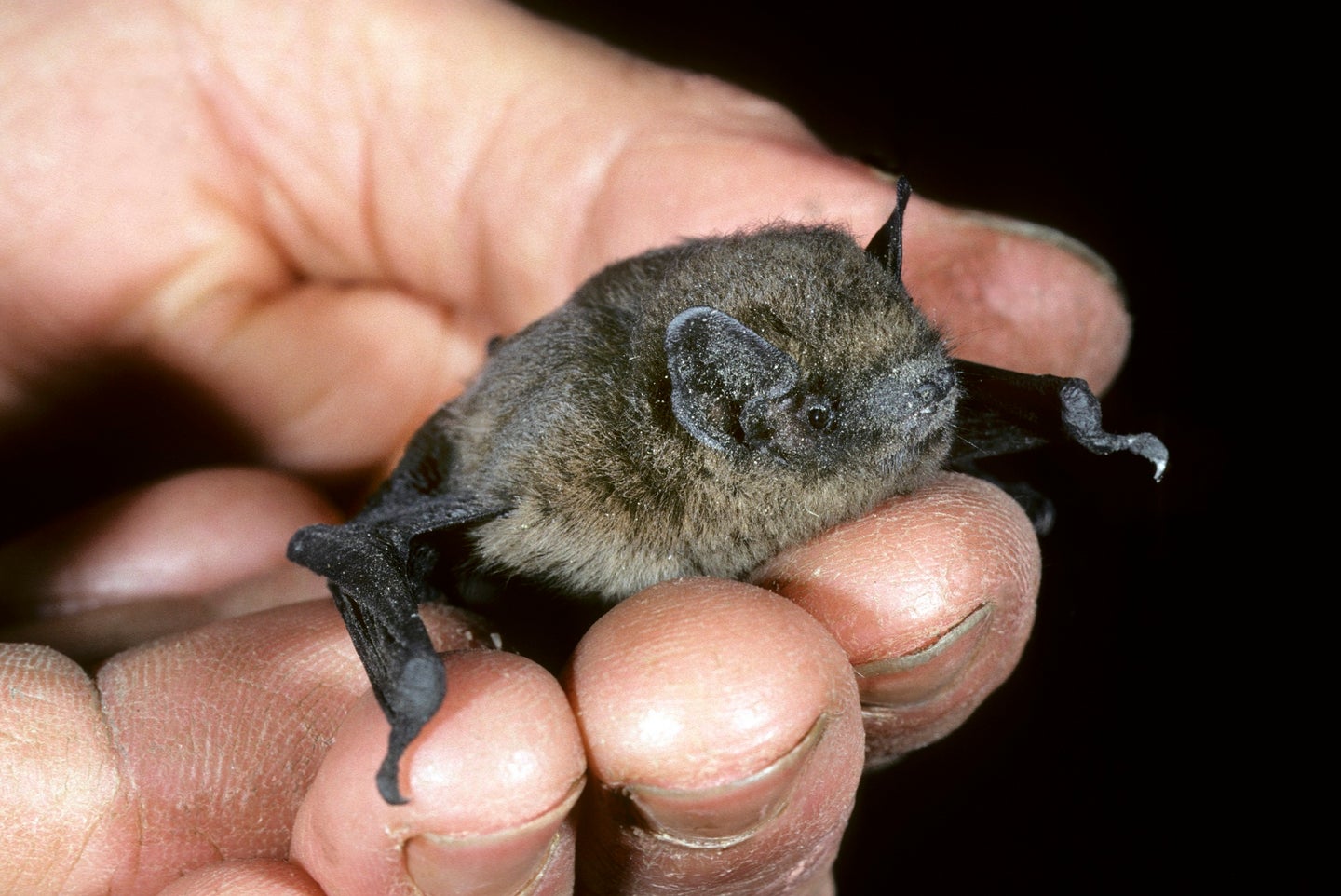 A Nathusius’ pipistrelle bat in the hand of researcher. Arterra/Getty Images

When it comes to bat species, Nathusias’ pipistrelle may appear to be relatively unassuming. Found across Europe, it’s about as small as a common pipistrelle, measuring under 2 inches long and weighing only 3 to 8 grams. But even with its petite size, the species can deftly migrate more than 600 miles in a season. Now, one Nathusias’ pipistrelle has broken the record for any measured bat migration, according to a new study published in the journal Mammalia.

In 2009, a young female pipistrelle was “ringed” in the Russian Darwin Nature Reserve, where she received a small bracelet with a identifying number on it. More than two months later, her body was found in the French Alps. A team of Russian and French biologists mapped out the journey to be at least 1,544 miles, although they speculate that with varied flight paths and hunting detours, the bat could have flown upwards of 1,864 miles. They also suspect that the individual might have flown through some of Russia’s chilly regions—an unusual choice for the small mammal, but supported by recent migration data.

[Related: The secret to these bats’ hunting prowess is deep within their ears]

Before this report, the record migration distance among bats also belonged to a Nathusias’ pipistrelle. That male flew roughly 1,381 miles, which could indicate that bats regularly fly farther distances than currently known. The Mammalia study authors called for additional studies on the pathways and distances these animals cover, particularly as Europe has installed more wind farms, which have been shown to negatively affect migratory bat species.

The 90,000-pound “devil fishes”  make one of the longest annual mammalian migrations. Each round trip is typically 10,000 miles per year, and one record-breaking whale is suspected of traveling 16,700 miles in one trip.

While many bird species make a two-way migration, monarchs are the only butterfly species with the same behavior. The insects only travel during the day, and at nighttime, clouds of butterflies roost in groups. The migration from Mexico to the northern US and Canada can occur over three to four generations, where each insect lives two to six weeks. The last generation of the year is the sole exception: Its individuals live eight to nine months.

These declining fish move from rivers to the ocean to grow up. They migrate as youths, or “smolts,” in the spring, usually at two or three years of age. Their routes take them from Maine’s rivers to the Eastern Seaboard, and eventually, back to their birthing grounds to reproduce. Atlantic salmon are “anadromous” because of this migration, meaning they can live in both fresh and saltwater.

Stretching up to 10 feet long and weighing more than 1,000 pounds, these migratory fish are powerful swimmers. They can move at 12 to 18 miles per hour in short bursts, which powers them across the Pacific Ocean in roughly 55 days. That 5,000-mile journey takes them from the coast of Japan, through icy waters 1,800 feet below the sea’s surface, and eventually to the shores of California and Mexico.