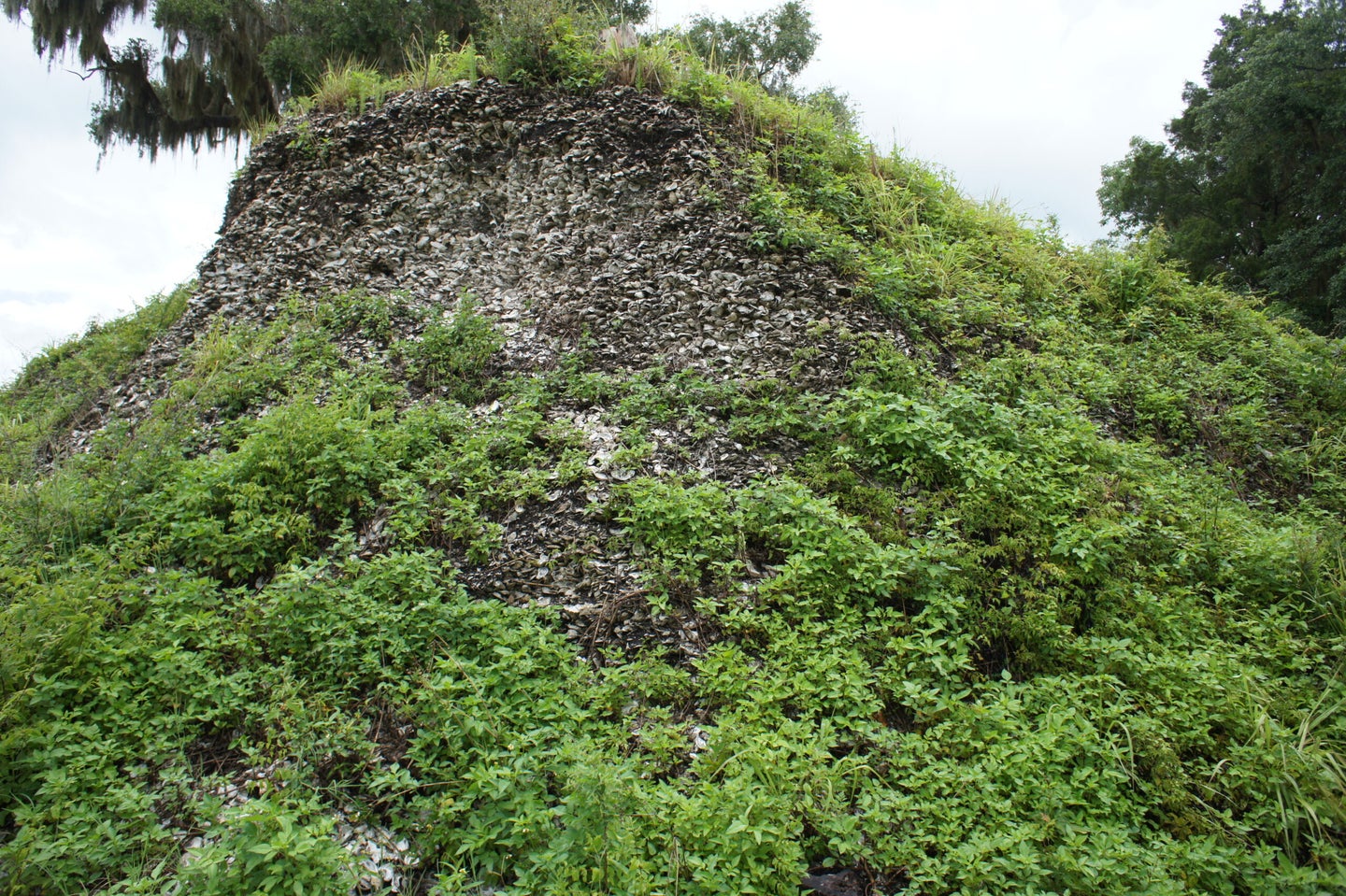 A mound at Crystal River on the Florida Gulf Coast made of oyster shell. Victor Thompson

From the coast of Maine to Florida, piles of oysters have stacked up over thousands of years. They come from meals gathered from once-vast reefs of living shellfish, which provided habitat for other fish, crabs, and shrimp in estuaries. Some of the shells are so big, you’d have to eat them with a knife and fork, instead of downing them in a single slurp.

That abundance is just one example of Indigenous oyster fisheries across the world that harvested massive quantities of bivalves without wiping out the source. A new global survey published in the journal Nature Communications this week shows how these remnants could provide a roadmap for restoring abundant coastal ecosystems.

“This is what [Muscogean ancestors] lived and thrived off of,” says Turner Hunt, a coauthor on the paper and historic preservation officer of the Muscogee Nation. The US government forcibly moved the Native American tribe away from the Southeast coast in the 1800s, but oral histories still recount that oysters helped define Muscogee homelands. While seeing evidence of that rich relationship didn’t surprise Hunt, he was astonished by how quickly a sustainably harvested oyster fishery could collapse after colonization. “Not just in the Southeast,” he says, “but pretty much everywhere that was commercially exploited.”

The new survey builds on decades-old work that reshaped marine conservation. In 2004, Michael Kirby, a paleoecologist at the University of California at San Diego, traced the colonial history of oyster harvesting in eastern Australia, the Eastern Seaboard of the US, and the Pacific coast of North America. Using historical data on annual oyster hauls, he showed that over a period of a century, growing industrial centers in both the US and Australia chewed through nearby reefs rapidly. “That really turned everything on its head and showed how dramatic historical overfishing was,” says Torben Rick, a coauthor on the new survey and a curator of archaeology at the Smithsonian National Museum of Natural History. Understanding the speed of that devastation sent ripples through conservation biology, as scientists recalibrated their sense of what a healthy ecosystem might have looked like.

But the team behind the Nature Communications paper also knew that Indigenous people had been collecting oysters in those regions for thousands of years, and wanted to fill in that history. “The story of that oyster harvest had a lot to tell us about how we got to the commercial fishery, and helps us decide what we want to do in the future,” says Rick.

[Related: Oyster architecture could save our coastlines]

So they returned to the three regions Kirby had examined to understand how there had been so many oysters in the first place, using a combination of oral history and piles of ancient shells to develop a multinational picture of Indigenous relationships to the invertebrates. By estimating the total number of oysters, their size, and the ratio of the bivalve to other foods at a site, they could track long term use of the resource and spot any potential collapses.

In most of the regions the researchers examined, they found immense quantities of oysters, often with evidence that harvests began well before 1000 BCE. In New England, shells appeared in the archaeological record even before sea levels stabilized at the end of the last Ice Age.

But the health of those fisheries didn’t appear to decline over time. In Florida, the size of oysters decreased slightly, a signal of some pressure on the shellfish. But people didn’t stop eating them, so the reefs must have survived and remained productive.

“I think it’s the first time anybody’s been able to pull that together [global perspective]. They did such a beautiful job of it,” says Erle Ellis, an environmental scientist and conservation ethicist at the University of Maryland who was not involved in the research. “Here is a pattern around the world where you can have sustainable oyster fisheries, managed for long periods of time. Recent times are where the problems show up.”

A key source of evidence came from shell mounds built on coastlines across the world. One, on the Florida Gulf Coast, contained around 30 million shells before it was partially destroyed. Another, on the Damariscotta River in Maine, is roughly the area of a football field stacked 20 feet high with oyster shells.

The mounds are more than just evidence of abundance. Textbooks often describe them as middens, or “trash heaps”—but they can be complex, engineered structures, with flattened religious spaces on top, much like the earthen mounds and pyramids across the American Southeast. Some of them were even used as tombs. “People don’t bury people in trash,” says Hunt. “I don’t think our ancestors would have viewed it in that manner.”

The fact that oyster shells played such a central role in communities hints at how people might have harvested so many without destroying reefs. For many of the ancient oyster fishers, the bivalves were likely embedded in a cultural system that saw them as more than just commodities.

The study didn’t come to a single conclusion on how people across the world maintained healthy oyster reefs, but the modern practices and oral traditions of some groups contained clues. The Quandamooka people of eastern Australia, who descend from the precolonial oyster fishers, raise young oysters today and stock them on artificial reefs made of recycled shells. That practice could be much more widespread—a coalition of Canadian First Nations, for example, is in the process of restoring precolonial “clam gardens” around Vancouver—but hard to spot in the archaeological record.

The lesson from the survey, the authors say, is to prioritize Indigenous stakeholders in coastal conservation and management.

“There is a genuine crisis in biodiversity,” says Ellis. But he adds it’s a mistake to think that humans will inevitably destroy ecosystems. “People look at humans as destroyers. That’s incorrect. There are many forms of interaction, and the one that goes unrecognized, yet needs to be the solution for the future, is the idea that humans can actually nurture biodiversity.”

That error has led conservation groups to be hostile toward Indigenous landowners, or even call for their disenfranchisement, nominally to protect the land from its inhabitants. But the ship is slowly turning, as Indigenous scientists and elders fight for recognition of traditional ecological practices that sustain most of the world’s biodiversity hotspots.

Bringing cultural values back into modern harvesting practices could help restore Indigenous sovereignty and oyster populations. But what does that mean for people who love their half shells by the dozen? Some ideas include banning the use of oyster dredges, which haphazardly scoop up parts of the seabed, or bringing people closer to the reefs again. Maybe “we look at oysters as something that [needs to be] consumed in the state they’re harvested,” says Rick. “You want a Chesapeake Bay oyster? Come to Maryland, eat in one of our oyster houses, visit the people harvesting oysters today.”

The post We have a lot to learn from Indigenous people’s oyster-shucking practices appeared first on Popular Science.

Source: popsci.com
We have a lot to learn from Indigenous people’s oyster-shucking practices

How researchers in a simulated moon habitat survived extreme isolation

Yes, you can overdose on melatonin. Here’s how to use the sleep supplements safely.